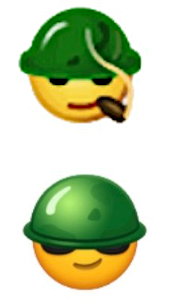 Before and after – WeChat soldier has quit smoking

China’s popular social media and messaging app WeChat has taken down an emoji featuring a smoking soldier after a Beijing-based anti-smoking organisation campaigned for its removal from all social media platforms in the country.

The original emoji showed a soldier wearing a green helmet and with a lit cigar in his mouth. WeChat’s owner Tencent Holdings has now said it would replace it with a similar figure in dark glasses and without the cigar.

The Beijing Tobacco Control Association (BTCA) first asked the internet giant in 2017 to change the emoji, which was supposed to represent “cool and chilling”.

“We thought it was problematic – it doesn’t go along with our anti-smoking campaign, and can be detrimental to youngers,” BTCA president Jianshu Zhang told TobaccoIntelligence.

Some of the app’s other emoji images have been altered to tone down or remove suggestions of violence.

Zhang said adults might not be affected but youngsters who used the emoji in their messaging app “have less critical thinking and could be affected”.

WeChat’s international and domestic versions combined had over 1.2bn monthly users in Q2020 and posted total revenues of $18.4m, an increase of 29% against the same period of 2019.

“The reply we got from Tencent at the time was that they needed time to change the emoji pack, and so we waited for the removal,” Zhang added. “Their move has been quite slow, but we are happy to see that it finally happened. It is a very socially responsible action.”

A Beijing University study in 2020 showed that internet users under 29 were subject to a higher exposure to online tobacco advertising than older age groups.

TobaccoIntelligence understands that the BTCA is currently in talks with Tencent to roll out an “anti-smoking emoji series”.