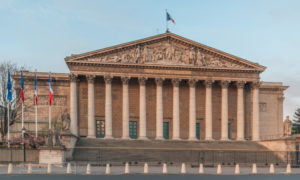 The Finance Committee of the French National Assembly (Assemblée Nationale) has rejected a proposal to cut taxes on heated tobacco to make tobacco-alternative products more attractive to smokers who want to quit the habit.

Assembly members Lise Magnier of Agir, la droite constructive (Act, the Constructive Right) and Charles de Courson of Les Centristes (The Centrists) presented an amendment to the 2021 budget (Projet de Loi de Finances) calling for the tax on heated tobacco products to be set at €288 per kg from 1st January.

The representatives, who represent two minority parties with a total of 12 seats out of 577, claimed France has one of the highest taxes in Europe due to the classification of heated tobacco (heat-not-burn, or HnB) in the tax category of “other smoking tobacco” in the country’s General Tax Code.

“The description of the categories is now outdated and the rate applied is slowing the development of this reduced-risk product,” reads the amendment. The text also notes that e-cigarettes, another reduced-risk product, have become much more popular in France largely due to the absence of all taxes except 20% VAT.

Under Article 575 A of the tax code, heated tobacco products are taxed as other smoking tobacco. The rate is currently comprised of a fixed fee of €29.1 per kg of tobacco, plus an ad valorem component of 50.7% of Tax Inclusive Retail Sales Price (TIRSP). The rates will go up next month.

France’s minimum excise duty is set at a rate of €126 per kg of tobacco.

The 2021 budget bill was presented by the French government on 28th September, and is currently under discussion at committee level.

What This Means: The rejected amendment aimed to boost French competitiveness and promote the development of tobacco alternatives while encouraging investment in innovative products.

The representatives behind the bid consider the current French tax scheme for tobacco-alternative products to be “obsolete” and believe that applying a specific rate would make it possible to secure state revenue independently of manufacturers’ pricing policies.

“This will at least allow the government’s opinion on this subject to be heard in order to continue working on and improving the proposal if necessary,” Magnier said.