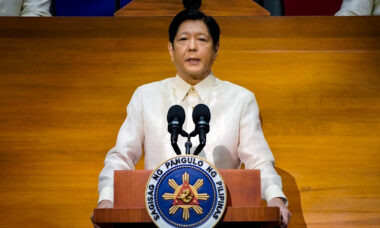 Calls by medical societies and health advocates for the president to veto the Philippines Vape Regulation Bill – and a change of government – failed to derail the bill, which also regulates heated tobacco and other novel tobacco products, as a lack of presidential action by the due date meant it lapsed into law. Under Filipino rules a bill lapses into law in 30 days if a president fails to act on it.

Victor Rodriguez, executive secretary of new president Ferdinand “Bongbong” Marcos Jr, has been quoted as saying Marcos Jr  “allowed the bill to lapse” without his signature on Monday, 25th July, the day he delivered his first State of the Nation address (pictured).

Rodriguez is said to have written to the Philippine Congress and also furnished a copy of the law to new Senate president Juan Miguel Zubiri and House speaker Martin Romualdez, both of whom also took office on Monday. However, a formal copy of the law has yet to be released by the presidential office, known as Malacañang after the president’s official residence.

Press secretary Trixie Cruz-Angeles had said previously that the new president had not indicated his stand on the pending bill.

Opponents now plan to challenge the bill’s legality before the Supreme Court, arguing that its unorthodox passage means it should be reconsidered.

Health advocates and medical groups, including the government’s health and education departments and the Philippine Food and Drug Administration (FDA), have long railed against the bill, contesting what they saw as several problematic provisions.

These include lowering the minimum purchasing age for products such as heated tobacco from 21 to 18, a move critics say will endanger the health of millions of young Filipinos.

The law also transfers regulatory authority and oversight of vaping and novel tobacco products from the FDA to the Department of Trade and Industry (DTI), which has only to consult the FDA when deciding on technical standards to ensure quality, consistency and safety of the products.

This nixes the Supreme Court’s June decision to uphold the FDA’s regulatory authority over all health-related products, which include vaporised nicotine and non-nicotine products and devices as well as novel tobacco products, due to their detrimental health effects.

Also alarming for critics of the bill is the range of flavours being allowed in the market beyond plain tobacco and menthol – out of line, they say, with what many other jurisdictions are currently doing.

Rizalina Gonzalez, chair of the Philippine Paediatric Society’s Tobacco Control Committee, has said that vaping “targets children” and that flavouring is “deceiving”.

The think tank Health Justice Philippines tweeted yesterday: “The Vape Bill will peddle nicotine addiction to Filipinos and has only one predictable result – more kids will now go into vaping.”

It said the “devious propaganda” of the e-cigarette industry had prevailed over the warning of the public health community and that the new law would counter the president’s pronouncement that he would build a stronger health system.

The long-awaited decision on the Vape Bill was passed on to Marcos Jr’s administration after former president Rodrigo Duterte failed either to sign or to veto it before his term in office ended on 30th June. The bill was one of 12 that lapsed into law at the end of Duterte’s term.

Duterte had been vocal in his stand against the use and importation of e-cigarettes, saying they were “not good for humans”.

In November 2019, Duterte said: “I will ban it, the use and the importation. I hope everybody is listening. You know why? Because it is toxic. And the government has the power to issue measures to protect public health and public interest.”

Joey Dulay, president of the Philippine E-Cigarette Industry Association, told ECigIntelligence in May that the protocols needed in Congress before it could transmit the bill to Malacañang might have stalled the process. Medical experts and health advocates believed otherwise, however, saying last month that the delayed transmittal of the bill could be a “strategy” to let it lapse into law as Duterte would not have enough time for a review and final decision.

The transmittal of the bill to the Office of the President, just six days before the end of Duterte’s term, was “very surreptitious,” Maricar Limpin, president of the Philippine College of Physicians, told ECigIntelligence. The short time before the transmittal forms the basis of the challenge expected to go before the Supreme Court.

Dulay previously said Marcos Jr seemed to be “more open” to vaping as an alternative to smoking – a view backed up by the new president’s action, or lack thereof.

“We believe that the enactment and the implementation of the Vape Bill will help 16m Filipino adult smokers kick the deadly habit for good with the help of less harmful alternatives while providing protection for minors,” Dulay told ECigIntelligence. “It will also ensure that all nicotine delivery systems in the country are properly regulated and appropriate penalties for violators are imposed so that minors and non-smokers can’t use them.”

Some legislators have also sided with the industry, citing the economic boost vaping would contribute to small and medium enterprises in the country.

Limpin, however, insisted: “We are already facing a pandemic. We don’t want to be facing another epidemic –and that is the vaping epidemic.”