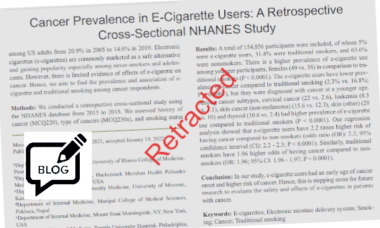 Few in the novel nicotine world are entirely happy with the ever-growing body of science exploring, and in some cases usefully reflecting, it.

To be fair, a great deal of the science itself is perfectly good, and people are simply disappointed that it doesn’t reach the conclusions they’d like (or reaches no conclusions at all, often for good reason). But there remains a worryingly large amount of work which makes casual, almost always negative, assumptions…and the occasional item which is so faulty it should never have been published at all.

One such is “Cancer Prevalence in E-Cigarette Users: A Retrospective Cross-Sectional NHANES Study”, a paper by a group of researchers at educational and healthcare institutions in the US, India and Nepal, published by the World Journal of Oncology in early 2022 and retracted by the journal shortly before Christmas. (NHANES is the National Health and Nutrition Examination Survey conducted by the Centers for Disease Control and Prevention – the CDC – in the US.)

On retracting it, the publisher said that “after publication of this article, concerns have been raised regarding the article’s methodology, source data processing including statistical analysis, and reliability of conclusions”, adding that the authors had not responded satisfactorily to these concerns.

What’s really surprising is that the paper made it to publication at all. Not only are there obvious writing and proofing errors (for example, a confusion between the percentage of e-cigarette users who had cancer and the percentage of cancer patients who used e-cigarettes), but the study leaps to conclusions from very flawed premises.

Dramatic conclusions, indeed: it finds that “e-cigarette smokers [sic] had 2.2 times higher risk and traditional smokers had 1.96 times higher risk of having cancer compared to non-smokers”. If this were the case, e-cigarettes might seem to be more carcinogenic than combustible cigarettes, and the authors would have been quite justified in saying that “this dangerous threat is a public health risk”.

Unfortunately, the paper’s methodology failed at the most basic level to support the claim. Though it implied in passing that most of the vapers concerned had previously been smokers, the authors seemingly didn’t consider the implications of this; instead, the link between e-cig usage and cancer was based merely on whether someone who had ever vaped had also ever had cancer.

So they might have had cancer before they started vaping. Or they might have developed cancer while vaping, as a result of earlier smoking. Or maybe they were indeed never-smokers who developed cancer rather quickly as a result purely of vaping; that can’t strictly speaking be ruled out, because the failure to take into account even basic timelines or individual histories renders the data almost meaningless.

This is not nitpicking at essentially solid research for partisan reasons; even if you don’t accept that vaping is safer than smoking, this paper should not persuade you of anything. The issues are fundamental.

What we know – and what we can’t know

Not taking that into account in trying to pin down the risk of vaping is, whether by accident or design, ignoring the blatantly obvious, and if it can’t be accounted for reasonably thoroughly then the value of doing the analysis at all is questionable.

Similarly, it should be obvious that knowing whether things have happened “ever” in an individual’s life gives us little insight into their relationship. While sequentiality is not causation, it is certainly a necessary condition; even more than the issue of prior smoking or dual use, this is a basic logical error which can be recognised without any special knowledge of vaping or smoking.

It’s important (and at least a little encouraging) to remember that such profound flaws are unusually egregious. Though it’s not the first time this has happened (there was a noteworthy retraction from the Journal of the American Heart Association a few years ago, concerning similar issues), much science in the field is fine as far as it goes. (Fineness perhaps correlating with not going too far?)

But the World Journal of Oncology episode is a reminder that, for whatever reason, glaringly bad “research” is still making it into publications – and thence, into the public and political eye. And though this particular study focused on vaping, as the quantity of work on heated tobacco, pouches and other delivery methods grows, it may only be a matter of time until we see similar blunders by journals in their coverage of those fields.

‘Everyone practises harm reduction, so why not for tobacco?’ ask health experts