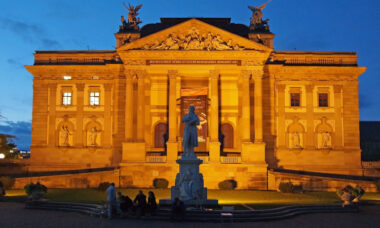 The German state of Hesse is targeting heated tobacco and e-cigarettes in a new legislative initiative to update the current regulations that will be considered later this week.

The proposal under discussion in the regional parliament aims to include the products in the new version of the Hesse Act on the Protection from Passive Smoking (Hessisches Nichtraucherschutzgesetz, HessNRSG).

“We want to protect people even better from the dangers of passive smoking in the future,” state health minister Kai Klose said when presenting the planned regulation at its first reading in early July.

The current version of the law stipulates a general smoking ban in institutions where citizens either have to stay, receive their education or spend their free time. Heated tobacco is not considered in the law as it stands, which is due to expire on 31st December.

The new proposal, put forward by the ruling coalition of the Christian Democrats (CDU) and the German Greens (Bündnis 90/Die Grünen), aims to make changes to include heat-not-burn (HnB) and vaping products under the HessNRSG.

According to the draft bill, such products release harmful substances into the air just as smoking does. The CDU considers the expansion of the law to cover them as a “central element” of the planned regulation, which should come into force next year.

“We know that these are less harmful to health than the classic cigarette, but the bottom line is that they are also harmful,” CDU representative Max Schad said during a discussion in the Hesse state parliament.

“For ensuring a comprehensive and preventive health protection and create legal certainty, these alternative forms of consumption have to be covered by law,” added Klose, a member of the Green party.

Opposition parties also supported the proposal. The liberal Free Democratic Party (FDP) said the proposed changes to the law were “certainly up-to-date” while Die Linke (The Left) said they amounted to an “indisputable” step.

The right-wing Alternative for Germany (AfD) party called on the government to take into consideration that tobacco alternatives are used by people to quit smoking.

Hesse, one of the country’s 16 states or Länder, lies in central Germany; it includes the city of Frankfurt and most of Frankfurt Rhine-Main, Germany’s second most-populous urban region.

What This Means: The Hesse bill aims to give better protection especially to children, adolescents and other vulnerable groups.

The state Social and Integration Committee is set to meet on Thursday to discuss the proposal in detail.