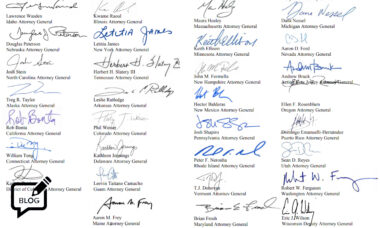 It has been well documented that flavored combustible and e-cigarettes (including menthol) attract youth at alarming rates, and we have every reason to expect that the same will be true for the newest generation of oral nicotine products.”

Or so say 31 US state attorneys in a letter to the acting FDA commissioner, Janet Woodcock, calling on the agency to limit nicotine levels in oral products and, predictably, ban flavours.

Of course oral products, like any tobacco and nicotine products, need to be regulated. But the focus on flavours is a knee-jerk reaction, and a distraction.

For starters, it really hasn’t “been well documented” that flavours attract youth. Sure, youth use flavoured products, and often say they like them (which is hardly surprising – they wouldn’t use them if they didn’t enjoy them. Survey users of any nearly lifestyle product and they’ll report that they like it.)

But there is precious little evidence from counterfactual situations to show that youth who otherwise would not have used nicotine started to do so merely because flavours were available. That would be the smoking (or vaping or sucking or chewing…) gun, but it is conspicuously absent.

The bingeing and the rhetoric

Then, having already decided to succumb/experiment, they choose the most attractive mode of consumption…and this may well be candyfloss-flavoured. But that doesn’t mean they wouldn’t have done it if candyfloss flavour wasn’t available. (For a much more in-depth discussion of all this, check out an excellent blog post from the British tobacco harm reduction advocate Clive Bates.)

Indeed, the state attorneys inadvertently imply this themselves when they refer to “the nation’s underage nicotine binge” – because if it exists at all, that’s what it is, a nicotine binge rather than a flavour binge.

Cynical and in poor taste

Perhaps setting nicotine limits is the way to address that (though beware of setting them so low that the products’ value in smoking cessation is undermined). Or perhaps, as so often with the issue of youth usage, the real solution is simply to make it much harder for kids to buy these products.

But that’s difficult to implement; it’s much easier to call for a flavour ban, raising the suspicion that the state attorneys’ letter is more rhetoric than a serious contribution to a discussion on sensible policy.

Still, what would you expect after their cynical, poor-taste, and logically questionable use of the word “pandemic” to describe the use of oral nicotine products?

Hardly any US teens use heated tobacco, but that doesn’t stop the fearmongering