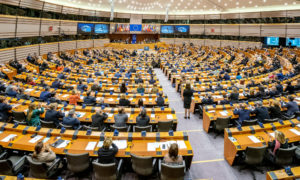 How much politicians know about novel tobacco products has a major effect on their perceptions of safety and risk, new research by TobaccoIntelligence suggests.

A survey of members of the European Parliament (MEPs) found that those who were knowledgeable about tobacco-alternative products were far more likely than those with no knowledge to consider them less risky than smoking.

The difference was particularly striking in the case of vaping, where 95% with knowledge felt it was safer than smoking, compared with only 33% of those without knowledge. No respondents at all considered it completely harmless, however.

For heated tobacco the proportions were similar – 88% against 36%.

The picture was slightly different for nicotine pouches; perhaps because they do not involve inhalation, they were regarded as less risky by nearly half of the non-knowledgeable, as well as 82% of the knowledgeable.

Unsurprisingly, the knowledgeable were also much less likely to tick “don’t know” in all categories.

Overall, MEPs’ attitudes to the risks of new nicotine products were positive. In all three product categories, a majority felt they were less harmful than smoking, although for each product category around 20% of MEPs still believed they were equally or more harmful.

Similar views prevailed on the products’ use in cessation, where the few MEPs concerned that they would lead non-smokers into smoking were significantly outnumbered by those believing the products would help people quit. Vaping was considered the new nicotine product most likely to help smokers give up the habit, but also the most likely to encourage smoking by non-smokers.

Opinions on regulation were more varied.

On advertising, 60% felt that rules should be as stringent as for traditional tobacco products, or even tougher. Attitudes to flavours were somewhat more lenient, with 56% favouring lighter-touch regulation for novel tobacco products. And a clear majority (76%) felt online sales should be permitted.

What This Means: While the negative attitudes still held by a substantial minority of MEPs may be depressing to some in the industry, public health and the vaping world, the good news is that it is clear how to address them: at least in Brussels, more informed politicians are generally more sympathetic ones.

And with progress towards the next incarnation of the EU Tobacco Products Directive (TPD) now building up steam, this may be a key time to ensure that fair and accurate information is communicated to policy-makers, not only on vaping but also on heated tobacco and other new nicotine products.