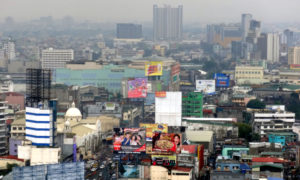 Check out all our complete coverage and analysis of IQOS here.

While the Philippines debates proposed regulations to restrict the rise of tobacco alternatives, PMFTC, the Philippine affiliate of Philip Morris International (PMI), has opened its first four IQOS stores in the Manila metropolitan area.

The new stores sell a range of products, including PMI’s heated tobacco devices and their associated Heets consumables as well as a full range of accessories, the company said.

They are located in malls in Quezon, Pasay, Las Piñas and Pasig, cities that surround the Philippine capital.

PMFTC’s president Denis Gorkun said the opening of the new stores marks a “significant step” towards achieving the company’s vision of a smoke-free future.

“PMFTC’s vision is to help adult smokers who would otherwise continue to smoke to move away from cigarettes as quickly as possible and switch to a better alternative,” the company told local press.

IQOS consumables were originally launched in the Philippines in April through vape store chains such as Fuma, Lighters Galore, Green Puff and DJ Shop in Metro Manila.

In June IQOS launched a Filipino website, and in August the 7/11 convenience store chain began selling Heets in Metro Manila.

PMI said it was implementing an age verification tool in the country to make sure access is restricted to under-21s.

The Philippines Food and Drug Administration (FDA) proposed a few weeks ago new restrictions on tobacco-alternative products, including requiring an age-verification system.

The proposal, which is still under discussion, would also require retailers to carry out their own compliance checks to ensure all their customers are over 21.

Last week, the Senate Joint Committees on Trade and Health adopted a bill to regulate the use, sale and distribution of e-cigarettes and heated tobacco products.

What This Means: The expansion of IQOS in the Philippines comes at a critical point for the tobacco alternatives industry after president Rodrigo Duterte put restrictions on heated tobacco and other novel tobacco products firmly on the political agenda.

Figures presented by PMI for the second quarter of 2020 showed falling cigarette sales in the Philippines as the company’s net revenues slumped in the South and Southeastern Asia region.

Philippines FDA lookening to tighten the screw on alternative products

Duterte hands down new regulations on heated tobacco in the Philippines