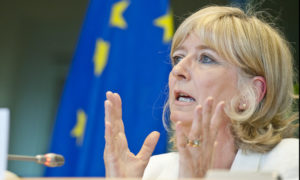 The European Ombudsman has accused the European Commission of failing to “proactively publish” details of all its interactions with the tobacco industry and reminded it of its obligations as a party to the World Health Organization Framework Convention on Tobacco Control (WHO FCTC).

In a letter to Commission president Ursula Von der Leyen, ombudsman Emily O’Reilly (pictured) warned that with the upcoming revisions to the Tobacco Products Directive (TPD) and the tobacco excise duty regulations it is especially important to retain transparency in line with the EU’s commitment to “protect public health policies from the tobacco industry”.

She says in her letter: “As a medical doctor, you will be very much aware of the damage posed to the health of citizens by tobacco, and I am sure you will also anticipate that these legislative revisions are likely to be a heavy focus of the tobacco industry.”

As ombudsman, O’Reilly leads an independent team whose role is to hold the EU’s institutions and agencies to account. And she expressed concern about the authorisation by the Commission allowing former commissioner Günther Oettinger to join the advisory board of global strategic communications consultancy Kekst CNC.

O’Reilly said that according to the EU Transparency Register, Kekst’s biggest client is tobacco giant Philip Morris International (PMI). And she reminded Von der Leyen about the need “to ensure that [the Commission] meets its obligations under Framework Convention by monitoring the compliance of the conditions it has placed on the former Commissioner”.

Since the transparency register was established by the Commission in 2018, more than 12,300 registered lobbyists have participated in the EU’s decision-making processes.

This is not the first time the European Ombudsman has expressed concerns about tobacco lobbying and a possible lack of transparency by the Commission in applying the FCTC.

In 2016 the ombudsman warned that the Commission, under then-president Jean-Claude Junker, was not being diligent in publishing details of meetings that various departments, especially the Directorate-General for Health and Food Safety (DG SANTE), had with the tobacco industry.

In 2011, during preparatory work on updating the Tobacco Products Directive (TPD), Paola Testőri Coggi, then director-general of DG SANTE, told the management team: “I would be grateful if you would in principle refrain from meetings with the tobacco industry”.

Referring to Article 5(3) of the WHO FCTC, Coggi told staff that “any interactions with the tobacco industry should be carried out in such a way as to avoid any perception of partnership or cooperation”.

Following a number of freedom of information (FOI) requests submitted by the campaign group Corporate Europe Observatory, DG SANTE disclosed that it had had 25 meetings with tobacco industry representatives since 2017.

What This Means: European Commission president Ursula Von der Leyen is expected to reply to the ombudsman’s stated concerns by 16th April.

It remains to be seen whether the Commission will take any steps regarding future meetings with the tobacco industry or whether Von der Leyen will defend the transparency measures currently in place.