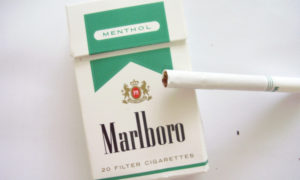 A coalition of US attorneys called on the US Food and Drug Administration (FDA) to ban menthol cigarettes “in the best interest of the public” and no longer delay a process that has been on stand-by since 2018.

In a letter sent to the federal agency a few days ago, 23 state attorneys considered this matter an “urgency” and asked the FDA “to finalize rulemaking and prohibit menthol cigarettes” as soon as possible.

The group also warned that the effect of menthol cigarettes on youth smoking initiation has been “well documented”.

They mention as an example the 2019 data from the Centers for Disease Control and Prevention (CDC) that estimated that more than half a million middle and high school-aged smokers (46.7%) use menthol cigarettes.

FDA ‘should not be swayed’

The attorneys also reminded that some of them “have long fought to protect their citizens, particularly youth, from the dangers of tobacco products” and that they have already reported several violations of tobacco regulations to the FDA.

They also warned that the federal agency should not be “swayed” by the tobacco industry.

The FDA made initial moves to ban menthol in 2018, but has not issued a full slate of regulations to carry out the initiative.

The US banned most flavoured cigarettes in 2009 when president Barack Obama enacted the Family Smoking Prevention and Tobacco Control Act. However, it did not ban menthol.

The agency’s Tobacco Products Scientific Advisory Committee (TPSAC) weighed in two years later, claiming in a report that “removal of menthol cigarettes from the marketplace would benefit public health” – although it stopped short of outright recommending a ban.

What This Means: This is not the first time that the FDA is urged to take further actions to crack down on menthol cigarettes.

In September 2020, the American Medical Association (AMA) joined a court case against the FDA, accusing the federal agency of failing in its duty to issue regulations to ban menthol in tobacco products.

According to the Federal Trade Commission (FTC), menthol cigarettes account for 36% of cigarettes smoked in the US.