The heated tobacco (heat-not-burn, or HnB) market emerged in South Korea in May 2017 when Phillip Morris International (PMI) launched IQOS. Since then the market has been developing, with two more brands,Glo and Lil, entering the market three and six months later respectively. This made South Korea the second country, after Japan, to have three heated tobacco brands on the market. Recent analysis shows that the Korean market has been growing.

ECigIntelligence carried out an online survey of heated tobacco users in Korea in March-April 2018 to learn about the user experience and to reveal the relationship between HnB, conventional tobacco use, and e-cigarette consumption.

Analysis was based on 160 validated responses from current users aged 18+. The survey was distributed on heated tobacco and electronic cigarette forums and online groups. A financial incentive was offered for completion of the survey, but the fact the survey was posted in groups/forums connected with heated tobacco suggests this probably did not lead to non-HnB users responding.

The Report you have tried to access is restricted to our subscribers, or may not be available in your subscription package. TobaccoIntelligence Reports contain detailed in-depth analysis on the regulatory landscape or market profile of a particular territory, or are consolidated reports on particular topics or sectors.

You can find available reports for purchase in our online store. Reports not listed in the store are available under request. If you are interested in a subscription, get in contact to discuss our subscription plans or to upgrade your current access.

Check out our reports available for purchase

Request a free sample of this report: 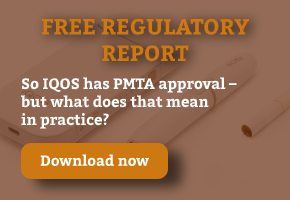 Podcast: the future of the Tobacco Products Directive and EU taxation

We also invite you to enjoy our FREE TRIAL

Sign up to our platform and you will have access to our latest business and regulatory news analysis, which keeps you updated with the latest hot topics in the sector.