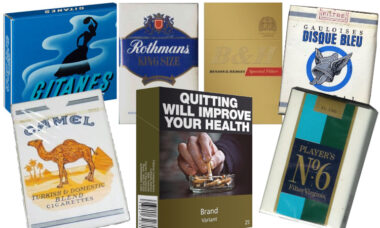 Interesting news for those (in the UK) who recall with nostalgia the days when you could tell your Rothmans from your Benson & Hedges at a glance or (in France) never confuse Disque Bleu with Gitanes. When Camels were curiously cool among those who wouldn’t be seen dead smoking No6.

Readers in the US will have to imagine how different cigarette packs will look should the Food and Drug Administration (FDA) get around to following the World Health Organization (WHO) advice on plain packaging.

Meanwhile those in the UK must imagine a world in which e-cigarette brands Juul, Vuse and Myblu are indistinguishable from one another on the shelf – a world those in the virulently anti-vaping Netherlands are set to step into at the start of next year, just three months after the country becomes the 16th to adopt a mandatory neutral tone for cigarettes.

Up to now the received wisdom has been that taking distinctive branding off cigarette packs and making them all the same drab, ugly brown (Pantone 448C, the designated “ugliest colour in the world”), marked only by prominent health warnings, will dissuade people from buying them. A project which both tobacco and advertising companies have understandably been unhappy with.

But here comes a study by researchers from the Luiss Business School in Rome and Deloitte which comes to an unexpected and counterintuitive conclusion.

Who would have thought it?

As described by professor Raffaele Oriani to the independent EU Reporter: “We found that the introduction of plain packaging has had no impact on cigarette consumption trends in the UK or France.”

Analysis of statistics from more than three years of plain packaging in those countries led to the view that “there is no evidence that plain packaging reduces cigarette consumption at any levels”.

Even more startlingly: “There is some evidence that plain packaging may result in higher smoking levels.”

Those who always look for a cui bono will note that the report was originally commissioned by British American Tobacco (BAT) and dismiss it instantly on those grounds. But here’s another thought: if plain packaging actually encourages smoking (or vaping) why would the manufacturers oppose it?

Of course, the designers and promoters of those attractive and distinctive Camel, Gitanes and Myblu packets would see it rather differently. And so might those manufacturers who see neutral design as a block to building brand loyalty – or its apparent opposite, the ability to tempt users away from another brand.