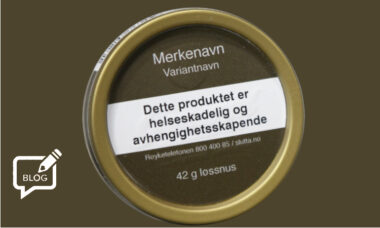 Researchers at the Norwegian Institute of Public Health (NIPH) found that plain packaging did not produce a decline in men’s snus use in Norway, with “inconclusive results” on both smoking and women’s snus use.

The study, carried out by the national public health agency and published in the official journal of the Society for Research on Nicotine and Tobacco (SNRT), concluded that men’s use of snus in Norway actually increased after the imposition of standardised packaging.

Although the research did not provide exact measures, exploratory analyses suggested an acceleration of the decline in smoking along with an increasing trend in men’s snus use. And for the researchers, this “begs the question of whether tobacco users have switched from smoking to snus”.

Still, researchers said they could not investigate this further based on the current available data and highlighted that future studies should test models of the gradual impact of plain packaging.

The research was conducted between 2012 and 2019 among Norwegians aged 16-79, reporting pre-registered analyses of the potential impact on daily smoking and snus use among men and women.

A spokesperson from the Norwegian Ministry of Health declined to comment on the NIPH’s research conclusions.

“This suggests that standardised packaging can reduce the potential for brand differentiation,” it reads.

Another recent paper from the Institute for Social Marketing and Health at the University of Stirling compared British and Norwegian responses to tobacco packaging before and after the implementation of standardised packaging. It found that “the inclusion of large novel pictorial warnings on standardised packs increases warning salience and effectiveness”.

It is two months since 15 former directors of the SRNT encouraged media, legislators and the public to re-evaluate negative attitudes towards tobacco alternatives, and more specifiially towards vaping. Despite initial surprise among the scientific community, there has not been yet any firm endorsement of their words.

For professor Cliff Douglas, director of the University of Michigan’s Tobacco Research Network, this may reflect “a deliberate strategy based on the perception that these scientific leaders’ statements are too inconvenient to address openly”.

It will likely be recognised “as a landmark when the history is written regarding the tobacco control battle over harm reduction,” he told TobaccoIntelligence.

The article, published in the American Journal of Public Health (AJPH), called for a more balanced approach to e-cigarettes and warned that the public had developed a negative view of these products.

Among the reasons for this, the authors pointed out that public health organisations have always been focused on protecting kids from vaping, ignoring the substantial benefits of e-cigarettes in helping adults quit smoking.

In another article published in the AJPH, Jonathan Samet of the Colorado School of Public Health and Aurora Jessica Barrington-Trimis from the University of Southern California said that if switching to tobacco alternatives has benefits, they affect smokers who might want to quit or reduce cigarettes. Both professors called on the public health research and practice communities to provide the needed evidence and facilitate its interpretation in a “well-framed” decision context.