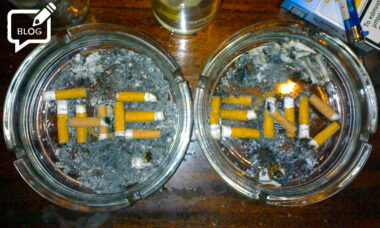 Unless you’re an investor, or potential investor, the city pages can make pretty dry, uninteresting reading. But the financial results may often hide more significant information about changes and trends in the real world than can be found in the sports results, however absorbing they may be.

Not that the intro on our news story said anything that should greatly surprise regular readers of TobaccoIntelligence: “JTI has reported increases in sales of reduced-risk products, helping offset falling shipment volumes of combustible tobacco products.”

The company’s good news story is how rapidly its heat-not-burn (HnB) device Ploom X has become big in Japan. But alongside, or in tandem with, the growth in HnB comes the 11.5% drop in Japanese sales of combustible cigarettes.

Put those two trends together and you have the one trend – you might almost say THE story we’ve been telling since the start – that marks a high proportion of our financial headlines. Here are just a few recent examples:

Commenting on the JTI results, Canadian lawyer David Sweanor – a leading expert on tobacco control issues for almost 40 years – said the decline in conventional tobacco purchases was unprecedented and “clearly one of the most significant events in the history of tobacco control”.

Looking further into the data on “the demise of the company’s cigarette business in Japan”, he said: “Cigarette sales in Japan that were 86.25bn in the first half of 2016 are 47.7bn in the same period this year. That is roughly 47% decline in just six years in what was once one of the world’s largest markets.

“That it has been accomplished without active policy encouragement also raises the question of just how rapidly cigarette smoking could be reduced if harm reduction were fully integrated into a nation’s policy objectives.”

Perhaps most significantly, he added: “The global tobacco control community pays very little attention to what is happening in Japan, and the evidence that this transition away from combustibles is now being replicated elsewhere. There is far more focus on thwarting rather than facilitating such market transformations. I think that is an indictment of the field.”

In news that might be seen as better for the public health advocates and worse for the tobacco giants than either are notably keen to trumpet, Sweanor notes: “The overall tobacco market, including the reduced risk products, has been falling.”

It’s not exactly a dying business – very far from it – but it’s a rapidly and interestingly changing one.