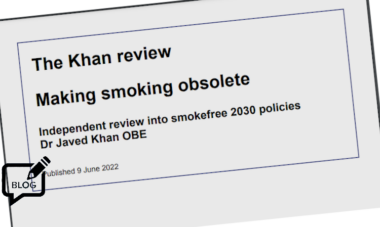 The review of England’s tobacco policy commissioned by the British government and compiled by Javed Khan has attracted much attention for its enthusiastic endorsement of e-cigarettes as a path to smoking cessation. It has also attracted some comment (though inevitably less) for its more lukewarm approach to heated tobacco, and its rejection of snus.

The Khan report certainly seems to strengthen the likelihood that the UK will retain its place as one of the most officially pro-vaping countries in the world (and maybe we didn’t even need a 101-page document to confirm that; there are few signs of back-pedalling). But could it also have lessons for the rest of the world, even for countries where there is far more hostility toward novel tobacco products?

Two academics, one British and one American, believe it should be required reading in the halls of US tobacco-control power. They – Caitlin Notley of the University of East Anglia and Clifford Douglas of the University of Michigan’s Tobacco Research Network – argue in a new article that “the UK and New Zealand are now leading the way in the battle to end the epidemic of smoking-related illness and death. The US can learn from them.”

In particular, they contrast Khan’s recommendations and New Zealand’s Smokefree Aotearoa 2025 plan, which also positively encourages vapour, with an America that is “mired in a polarized debate” and where efforts to curb youth e-cigarette use have “led to significant public misunderstanding regarding the substantially lower health risks of e-cigarettes compared to combustible tobacco products. This, in turn, has impeded the promotion of tobacco harm reduction to the more than 30 million adults who still smoke.”

Bright spots in the US landscape

So far, so familiar. But the authors do not entirely write off the prospects of enlightened regulation in the US, and there are brighter spots on its tobacco-control landscape too, they say: for example, the proposed reduction of nicotine in combustibles to minimal levels, and the prohibition of menthol in combustibles, as well as the few marketing orders that have been granted by the Food and Drug Administration (FDA) for e-cigarettes.

While most in the industry and in the vaping community consider the number of e-cigarettes the FDA has been willing to approve to be ridiculously small, at least allowing some to remain on the market while simultaneously reducing the appeal of combustibles through those other measures suggests – according to Douglas and Notley – that the agency has not completely forgotten about the continuum of risk. (Even if many lawmakers and pundits seem to have done so.)

This is perhaps Notley and Douglas’s most interesting point, and it is not the harm-reduction world’s (or the industry’s) usual way of seeing the FDA’s premarket tobacco product application (PMTA) process. Many regard the wholesale rejection of so many applications as amounting, in practical effect, to a near-ban on the category. And yet as these researchers imply, the fact that even a small number have been approved indicates that the FDA does accept that alternatives to combustibles can, in some circumstances, be appropriate to the protection of public health.

In other words, while the glass is definitely more than half-empty and nowhere approaching half-full, it’s still not totally empty.

Let’s not be Pollyanna-ish about it. It’s vanishingly unlikely that the US will turn into a vape-friendly UK or New Zealand overnight. For example, even if we can suspect – from the fact that the mandatory low-nicotine regime so far looks likely to apply only to combustibles, and not to alternatives – that the FDA is not committed to total war on nicotine, it still looks (judging by the PMTA outcomes) committed to a total war on flavours.

And there are still plenty in Congress and other places of influence who are so blinded by the words “nicotine” and “children” that they are quite unable to discern a continuum of risk, an off-ramp, or anything else positive in alternatives.

Still, if nothing else, Douglas and Notley’s article reminds us that there are ways ahead. The US is not going to embrace the Khan model, of course, and the vapour market in that country is not going to return to the free-for-all of a few years ago – but an opening could nevertheless exist to remind regulators that the continuum of risk exists, and that alternatives occupy a better place on it than combustibles.

What’s more, if that can be achieved, heated tobacco and modern oral products – relatively unstained by the US vaping hysteria of the recent past – may (Khan’s views notwithstanding) be in an even better position than e-cigarettes. The PMTA process undeniably looks like a heavy defeat for tobacco alternatives, but it may turn out to be more a lost battle than a lost war.