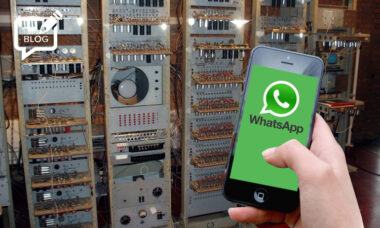 As far back as I can remember, to the 1970s, it was obvious that computers were going to change the world. But what blindsided nearly everyone was the rise of the mobile phone (nearly everyone: to sci-fi screenwriters, for example, it was old news).

Sure, we’d come to realise that computers didn’t have to be plastic-and-metal behemoths in dedicated data centres, but we were still conditioned to think of them as things that sat on desks and were accessed through keyboards, just as the terminals of the earlier, more centralised computers had been. And then along came the cell phone, doing many of the same jobs as the personal computer but in a format that was completely unexpected.

Perhaps the same thing is happening in the reduced-risk nicotine world with the rise of pouches. For some years the focus was on vapour, then heated tobacco edged into the scene, but both technologies – successful as they have been in many respects – are still essentially progressions of the decades-old quest for the “safer cigarette”.

Pouches, though, provide many of the same benefits in a radically different format, and they are also as different from old-fashioned oral tobacco as mobile phones are from the beige Formica handset.

Where will they go from here?

With this in mind, it’s fascinating to speculate on how the pouch market will develop. Who will use them, and why, and what will they replace? The category is too new to give answers with certainty, but two recent consumer surveys that we conducted in the US and the UK provide some interesting clues, in both their similarities and their differences.

American and British pouch users, it seems, have some things in common: it was often curiosity that led them to the products, satisfying craving is an important motivator in continuing to use them, they consume similar amounts, their format preferences are alike. But in other respects they are not at all the same. American pouch users are much more likely to be male, and older than the Brits, for example.

Most significant of all, perhaps, is the way that pouch use intertwines with attitudes to health and with other nicotine consumption. The British pouch users were much more likely than their American counterparts to cite health concerns as a reason for taking up the products, while the Americans were much more likely to mention health as a reason for stopping. And while the Americans were more commonly smokers as well as pouch users, the British were more frequently vapers.

What does this tell us, beyond confirming that national pouch markets are inevitably going to differ? Perhaps that, despite the apparent departure from the cigarette model that pouches represent, consumers’ attitudes toward them are not so separable from their broader attitudes to smoking, vaping and nicotine itself. The Brits seem more willing to embrace reduced-risk ideas, and employ both pouches and vaping for health reasons; the Americans seem more nervous of nicotine itself.

So: yes, the growth of the pouch market has been something rather unanticipated, and the products are an even bigger step away from the combustible than vapour and heated tobacco were – just as phones moved even further away from the data centre model than personal computers had.

But, in that they use many similar technologies and fulfil many similar needs, phones and computers can still be affected by the same external factors (changes in the prices of electronic components, for example, or developing trends in entertainment).

And in just the same way, the pouch market will not be untouched – either positively or negatively – by wider issues related to reduced-risk products and nicotine generally, ranging from consumer attitudes to government regulation.